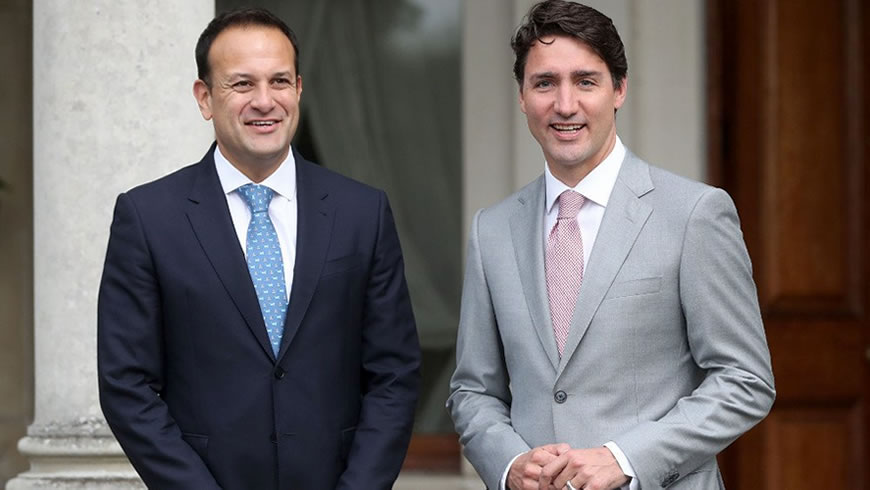 Tonight we celebrate the strong friendship between Ireland and Canada.  And it is a very special night for me as you are the first Prime Minister to have visited Ireland since my election as Taoiseach.  You and your family are most welcome.  Ours are very old and historic countries – although their leaders seem to be getting younger!

In 1975 before I was born and when you were just 3 years old another Prime Minister Trudeau visited Ireland for St Patrick’s Day.   One of my forbears as Taoiseach, Liam Cosgrave, gave him a similar warm welcome, and they held important discussions about trade, and the potential for building significant links between Canada and Europe.

Mr. Cosgrave opined that Ireland and Canada had much in common, because both countries had experience of large and powerful neighbours.

Perhaps indiscreetly, he even joked that it was like living beside an elephant.Thankfully that’s not the case now.

Back in 1975 Ireland was the newest member of what would become the European Union, and Mr. Trudeau talked about his desire to create new friends in Europe, and develop new trading relationships.

Under your leadership, that ambition has now reached its brightest point, thanks to the EU-Canadian trade deal, CETA.  We look forward to its early ratification.

CETA will reduce trade barriers, open up access, and benefit the middle classes and working people in both our countries, while at the same time protecting our environment.

It has rightly been described as a truly progressive deal, and Prime Minister Trudeau you are to be congratulated for helping to turn the ideal of a previous generation into a reality.

In an increasingly uncertain world, Ireland and Canada share the same outlook.  We are like-minded.  We believe in multi-lateralism, free trade, respect for personal liberty, the value of diversity, the benefits of migration, the need for climate action and openness to the world.

As Europe adjusts to the changes that will take place with Brexit, there is an opportunity to deepen our economic relationship.

After Brexit, Ireland will remain an English-speaking country, at the heart of the Single Market, with unfettered access for companies, and in the Eurozone.  We are founder members of the single market and the euro and we know that our rightful place is at the heart at the common European home which we helped to build.

Canadians are always very welcome in Ireland, and Canadians looking to do business, study or holiday here will find a country that is ambitious, full of potential, and excited by the opportunities to make the most of a changing political landscape.

It is partly for those reasons that I am delighted we are joined this evening by so many distinguished guests representing various aspects of Ireland-Canada relations including politics, tourism, business, culture and sport.

Indeed, as a former Minister for Tourism and Aviation, I am delighted that tourism is up over 50% in 3 years and I am excited about the many new direct connections including, Vancouver, St. John’s and Montreal.

Ireland benefited from Canadian values and your openness when so many people left these shores in centuries gone by, and indeed so many Irish people still benefit from those values today.

Your home-town of Montreal was transformed in the 19th century by waves of Irish immigrants.  They helped to build the city, and together the Irish, the Canadians, and people from all around the world helped to create a diverse country that is today a beacon of hope, of idealism, and of toleration.

Canada 150 and the Irish Invasion of Canada

Four days ago Canada celebrated the 150th anniversary of Confederation, a significant birthday, and we in this country would like to pass on our congratulations.

Of course, Ireland played a role in the lead-up to that event, although for diplomatic reasons our two countries rarely mention it.

A year earlier, in 1866, a group of about a thousand armed Irishmen crossed the border from the United States and tried to invade British Canada.  Many were veterans of the American Civil War and they believed that their actions would kick-start a revolution in Ireland or help them to negotiate a deal for Irish independence.

They even had their own marching song, which ended with the rallying cry:

‘Many battles we have won, along with the boys in blue,

And we’ll go and invade Canada,

For we’ve nothing else to do!’

The attempted invasion was not a success.  Although I am glad to say that the Irish behaved well on their travels.  The Ontario politician, George Denison, admitted that ‘they stole few valuables and treated everyone with unvarying courtesy’, so they upheld the Irish reputation for not causing too much trouble abroad.

The Battle of Ridgeway is considered the last battle against foreign invaders in Canada, and has been called ‘the battle that made Canada’.

So I am glad that the Irish played a part in the creation of the modern Canadian state,even if it wasn’t our plan.

Of course, Ireland’s links with Canada are long-standing and more enduring than the occasional skirmish.

As I have said, over the centuries millions of our people found a home in Canada, and we contributed to the creation of a diverse and multicultural country.  14% of Canadians claim Irish heritage today, a higher proportion than in the United States.

During the Great Irish Famine of the 1840s, when a million starving people were forced to emigrate, many found food, shelter and a new home in Canada.

They found a family, and today those familial connections are as strong as ever.

The trauma of the Famine is memorialised in both of our countries.  In Dublin’s Docklands there is the moving ‘Famine Memorial’ by Rowan Gillespie, a poignant commemoration of the starving people who were forced to depart to find new lives in other countries.

I know that you had an opportunity to visit the monument today.

And, in Ireland Park in Toronto there are matching sculptures, representing the people arriving to start a new life.  They represent Despair and Hope, mirror images of the transatlantic experience, joining our countries forever despite being 3,000 miles apart.

I am delighted that Rowan Gillespie and Robert Kearns, the project leader for the Ireland Park in Toronto, are here with us this evening.

Today millions face the threat of famine in South Sudan, while the people of Yemen, Somalia and Syria also live in the shadow of hunger.

There is war and strife in many other parts of the world. We must learn from the past and play our part internationally in fighting famine and promoting inclusive economic growth, democracy, human rights and freedom in the developing world.

I am determined that Ireland will play its part on climate change, working with partners like Canada and the EU to make a success of the Paris Agreement.

We have set out our vision of an Ireland with a competitive, low-carbon, climate-resilient and environmentally sustainable economy by 2050, and just last week my Government agreed Ireland’s first National Mitigation Plan.

This represents a hugely important step in our national transition and I am delighted that it was one of the first decisions taken by my Government.

We will continue to fight to leave a more sustainable and prosperous world to future generations, where every person is able to reach their potential, and where people are judged not on their gender, or their sexuality, or their race, but as individuals their actions and their character.

One of the greatest of all Canadian poets, the one and only Leonard Cohen, found a second home in Ireland.

He regularly performed here and his concerts became legendary.  On two occasions he performed at Lissadell House in Co. Sligo, a place that had inspired his own hero, W.B. Yeats.

Ten thousand people listened to Cohen recite some of Yeats’s poetry, lines he had learned from memory growing up in Montreal.

He admitted that he never imagined that his path would lead him there, ‘to be sheltered in the spirit of the great master’ as he put it.

At a concert not too far from here almost ten years ago Cohen said that it was ‘a privilege to say a poem to us in this city of poets and singers’.

Believe me, the privilege was ours.

Our countries are connected by our cultures, by our literatures, by our peoples.  We are divided by an ocean, but bound forever by our past, and united in our hope for the future.

Prime Minister Trudeau you are very welcome back to Ireland, and you and your family will always have a home here.

As we face an uncertain world, and the increasing challenges of the new century, know that you have a friend and ally in Ireland, and a partner in working for the betterment of our peoples, our two countries, and the world.